Bad Ass Ways to Save the World 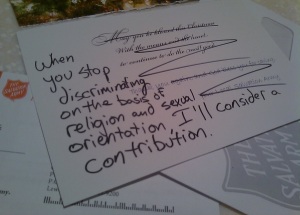 So, it’s that time of year, again, when we get to see a dirty, half-drunk Santa dressed up and ringing a bell outside of the local shopping centers in honor of the Salvation Army.  Before you reach into your pocket and pull out that handful of change and pocket lint, take a minute to read this post!  If you are like me, then you want to do what you can to help change the world, but at the same time, you don’t want to help make it suck more.  While the Salvation Army has helped out many many people, they have also turned their backs on many people in need… for instance:  THE ENTIRE GAY COMMUNITY!  That’s right, I said it.  The Salvation Army is anti-homosexuality!  Now, put that change back in your pocket!  I have done my homework and have located lots of other charities where your money would be much more appreciated, such as Habitat For Humanity (which has a Christian background, but discriminates against no one).

END_OF_DOCUMENT_TOKEN_TO_BE_REPLACED

Tonight’s the night we all get super tanked and pass out early so that Santa can deliver his presents.  But before he makes his way to Earth, he needs to make a pit stop at a planet similar to ours.  A great evil named Horde Prime has learned of the Spirit of Christmas, fearing that it just might be the only thing powerful enough to stop him.  Guys like that make me want to kick them in the jingle balls. END_OF_DOCUMENT_TOKEN_TO_BE_REPLACED

Come on, get up, and quit your nappin’!  It’s a crazy, messed-up place, where anything can happen!  There’s a chair that freakin’ talks (HEY LOOK!), there’s some fish that give advice (HOLY CRAP!)!  It’s screwy…at Pee-Wee’s playhouse!

That place really is nuts; I know, cuz I’ve been there a few times.  But when Christmas time rolls around, some wild shit happens.  END_OF_DOCUMENT_TOKEN_TO_BE_REPLACED

His name is Shumway.  Gordon Shumway.  He is a refugee from the terrible explosion of planet Melmac (a quaint little rock, once located six parsecs past the Hydra-Centaurus Supercluster).  Many of his customs are strange to us, like Fappiano and National Rag On The Martians day.  Christmas is one of ours that he can’t quite grasp. END_OF_DOCUMENT_TOKEN_TO_BE_REPLACED

BATMAN The Animated Series: Christmas With The Joker

HEY!  The Joker’s not suppose to know that song!  That’s OUR song!  And how in the hell did the guards at Arkham let a rocket-tree slip by their ever watchful eyes?

No man in the history of  Sitcom Land takes their neighborhood decorating contest more serious than Tim Taylor.  Everything from “The Three Wise Tool Guys”, to a full sized electric Tim, has a well thought out spot on his roof.  But not everything is all “Holly Jolly” in the Taylor household this year.  It seems the old proctologist across the street has found a way to go decoration for decoration, illuminating his place with near identical ornaments before The Tool Man can set up his.  What a Scrooge McFuck. END_OF_DOCUMENT_TOKEN_TO_BE_REPLACED

The Year Without A Santa Claus: Snow Miser/Heat Miser

Outside my window is a world of frozen misery to some, winter wonderfulness to others.  Remind me to drop a line to Heat Miser.  His brother needs to be smacked.

Everyone knows that it’s not the house with the most expensive decorations that makes the holiday season memorable, it’s the tackiest.  Nobody wants to see a mansion engulfed in nothing but white “icicle” lights, 50 foot white tree in the “family room” that no one is allowed to sit in, family from across the country laughing and cavorting, with the kitchen staff of 30 readying the annual holiday fish with all the trimmings.  That’s not what Christmas is all about.  Christmas should be about stringing up empty beer cans, waiting until Christmas Eve to steal a 6 foot/half dead tree from the “closed ’till next year” lot down the street, all while mom and her sisters argue about how to ready a fat 45 pound turkey for it’s date with the oven.  Ah, memories. END_OF_DOCUMENT_TOKEN_TO_BE_REPLACED

While preparing my nightly ritual of what to bring to work, Silent Night Deadly Night 2 caught my eye.

END_OF_DOCUMENT_TOKEN_TO_BE_REPLACED

Sure, it’s the end of August and Christmas isn’t for another 4 months. So what. While looking for something to keep my lazy ass awake at work, Black Christmas caught my attention. Now this isn’t the 1974 version that the entire world should watch at least once in their life (myself included). The film that was chosen happened to be the much hated re-make. Chastise me all you want cyber nerds, but when you have a collection the size of mine, desperate times call for desperate measures….and I was just plain curious.