“Oh baby Lilly Munster…ain’t got nothin’ on you!“

Well, I finally did it.  I got to such an extreme level of boredom that I willingly watched the Night of the Demons remake.  Either this was just a very dull Wednesday, or there is something seriously wrong with my brain.  That’s it.  I’ve gone mental.  Insanity is the only thing that would bring me to watch a remake of a movie I cherish so deeply, and would explain why I liked some of it.

Some of you may not have seen the original movie, and that’s upsetting.  It knocks me on my ass every time I find out information like that.  No problemo, people.  I’ll fill you in on the goings on.  This super goth chick Angela throws a party in a haunted funeral home to scare the balls off some of the ass-clowns she goes to school with.  During one of the party games, the evil in the house wakes up and starts possessing the party goers.  That’s basically it.  A simple story for a rather low budget movie.

Things weren’t so simple in the remake.  Shannon Elizabeth and Edward “T2” Furlong were brought on board for this round, in what can only be a lame attempt to use the star power of B-Listers.  The story goes a little something like this:

A much hotter version of Angela (played by Elizabeth) is throwing a huge party in a known haunted mansion in New Orleans.  Edward Furlong crashes said party to peddle the wares of his drug lord boss, for if he don’t he be one dead dude.  The cops show up to bust up the party, though the main characters stick around to either find their passed out friends, or to hunt down the vent they stuffed their drugs into.  Angela takes Eddie to the basement where the drugs fell and they find a secret room with corpses lying on the floor.  One bites Angela, she gets possessed, and the rest is self explanatory.

Boos: As much as I love and appreciate the work Linnea Quigley has done, I think it’s time for her to put her 80’s garb away for now.  She’s made so many rocking movies that it pains me to say anything negative about her, especially since she was beyond cool when I met her last year.  But seeing her trying to relive her “gory”days in this picture made my heart sink.  It would’ve been one thing if she made a cameo as the demon/ballerina with a tube of lipstick in her boob, in fact that would’ve been amazing.  Instead, she was handing out candy (to two little girls no less) and did her infamous “look at my ass” bit. 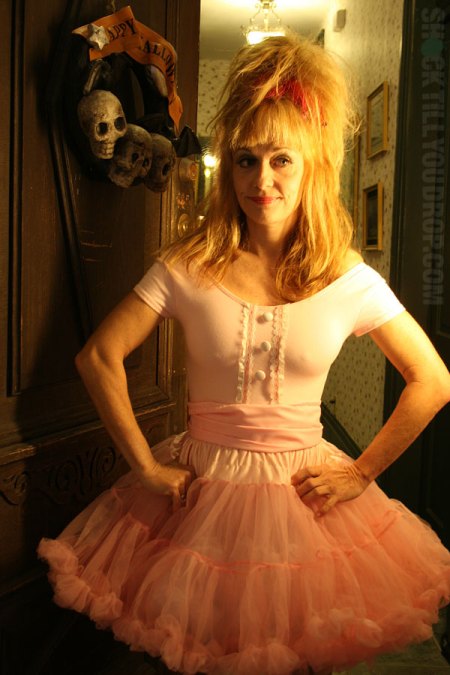 Anybody else feel the need to take a week long shower?

Monica Keena has been awesome since her days on Undeclared.  It just sucks that she’s been getting such horrible direction in recent years, this film included.  Nearly every quipy line she delivered sounded like that one from Freddy vs Jason.  You know the one I’m talking about:  “Wait a minute!  One of them died by fire, the other by water….how can we use that?!”.  BARF!

Do you see that iron bar that Edward Furlong is holding in the pic below?  Well I wanted to take something just like that and shove it straight through my head; in one ear and out the other.  He was was so fucking annoying!  What ever happened to that bad ass dude with his own terminator?  Maybe he’s hiding under all that fat and depression. 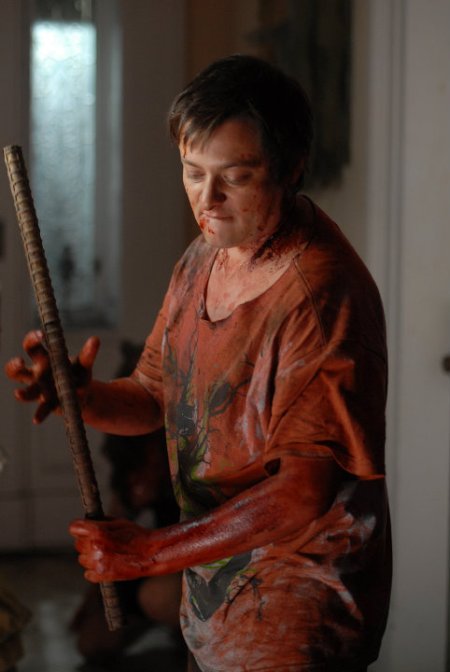 Bravos: Some good was able to shine through all the bad acting and countless flashbacks, mostly in the form of girl-on-girl action.  Say what you will about the cliche factor, but it’ll never get old as far as I’m concerned.  Seeing hot chicks make out rules, especially when it’s a gothed out Shannon Elizabeth.

The gore in the film was top notch.  Old gags were tweaked while new ones surprised the shit out of me.  I found myself saying “WHOA!” aloud during more than one scene.  They even tied in a little anime stylings too.  Seeing tentacles rocket out of a hot chick’s tits was disturbingly delightful. 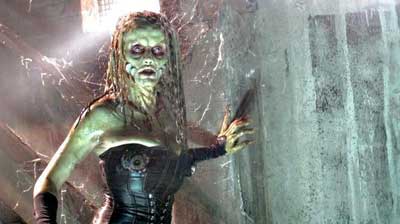 Nearly a day has passed since my viewing of Night of the Demons ’09, and I’m still a little torn.  My heart hates the very existence of this film, yet my balls swell over the blood and boobs.  Perhaps the best thing to do in a situation like this is to watch it again, only very drunk with a group of fellow horror hounds.  Maybe then I’ll be able to come up with a solid decision.  But until that time, I think it best that everyone play it safe and watch it on Netflix.

This entry was posted on Thursday, January 6th, 2011 at 3:34 pm and is filed under Entertainment, Movie Ish, Movie Reviews, New Releases, Signs of the Apocalypse, Things That Make Me Drink, Trailers, YouTubeness. You can follow any responses to this entry through the RSS 2.0 feed. You can leave a response, or trackback from your own site.