Minnesota; a frozen tundra full of Viking descendants, gelatinous fish, mighty ice skating ducks, and colossal malls.  One must be crafted of stern stuff to thrive in such hostile environs, though the sexy ladies of VIXEN made doing so a walk in the park.  They could melt the snow off a wampa’s hairy nut-sack and still have time to belt out some rocking music (probably on tauntaun back).

Supreme hard rock band VIXEN was formed back in 1980 by guitarist Jan Kuehnemund, when she wasn’t cutting class or smoking in the girl’s room that is.  The 1984 version of the band appeared in the film Hardbodies with such amazing actors as Courtney “Malachai” Gains from Children of the Corn and Grant “Mike Tobacco” Cramer from Killer Clowns From Outer Space.  Their career took a turn for the better once they moved to L.A. in ’85.

The band went through many lineup changes until the ladies we now know and love found each other: 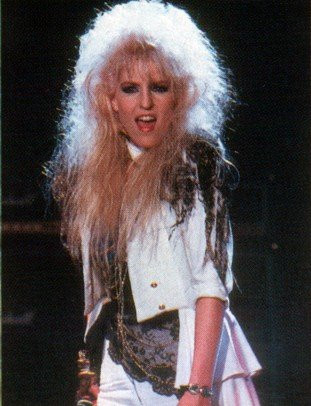 To get the full VIX-sperience, you seriously need to watch their videos.  That is, of course, if you enjoy leather clad legs, sultry singing, and high heels used on kick pedals.

(once again the YouTube overlords have made it imposable for me to show you the videos here, so smash the links below to watch)

Edge Of A Broken Heart

Jan and the girls parted ways in mid ’91 due to musical differences; a common occurrence with bands.  They’ve reunited the VIXEN machine a few times over the years, though I never got the opportunity to see them.  It’s cool, though.  I’d rather remember them as super sexy musicians following their dreams, instead of gravity ravaged soccer-moms who can’t let go of the past.  Too harsh?  \m/

This entry was posted on Monday, October 18th, 2010 at 1:42 pm and is filed under Entertainment, Holy Shit, Monday Morning, music, Nostalgia, Song of the Day, Things That Make Me Drink. But in a Good Way, TV ish, YouTubeness. You can follow any responses to this entry through the RSS 2.0 feed. You can leave a response, or trackback from your own site.