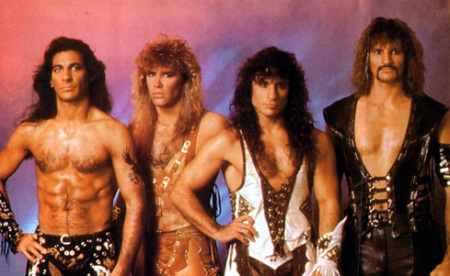 Well folks, they’ve done it again.  Continuing their recent string of outlandish ideas, once great heavy metal band ManOwaR has found a new way to have their fans shelling out ass loads of cash on usless products.  From Magic Circle Music:

“MANOWAR is currently recording a song from their new album in 15 (and counting…) different languages!! Never before has this been attempted by any heavy metal band!! Stay tuned for video clips of each version as they are recorded with an indepth look at Eric Adams’ odyssey into the world of multi-lingual vocals!”

Being a former super ManOwaR fan, I have made my fair share of dumb purchases (ManOwaR light switch cover, to start).  This is something that I have come to accept, and regret nothing.  It just really gets my nuts in a knot when a band that I use to seriously respect looks at their fans as nothing more than retarded dollar signs.  Too bad they couldn’t put this much effort into their personal lives.  Maybe bass player (and resident band lunatic) Joey DeMaio could finally move out of his mother’s basement.  That’s not a joke.  He still lives in his mother’s basement!

This entry was posted on Monday, April 13th, 2009 at 11:40 am and is filed under Entertainment, music, Things That Make Me Drink. You can follow any responses to this entry through the RSS 2.0 feed. You can leave a response, or trackback from your own site.

3 Responses to ManOwaR Finds New Way To Be Ridiculous